Breakfast was not an option at the hotel, but was glad to leave it despite a late start at 8 am. I had some McDonald’s left over from the night before to keep me going for the first couple of hours. The previous days effort, and illness from the start had started to catch up with me and was feeling a little worse for wear with a hint of a cold coming on. Despite this, I was determined to give it bit of a nudge today. In all honesty, I was letting go the desire to race to the finish, but with various other riders nearby looking at the tracker I figured it would be a bit of fun to put some pressure on them. Also, the Po Valley would be the one place where my bike and set up would be best suited. It was pan flat, and with narrow fast rolling gravel tyres and aero bars I could grind out the next 200 km and gain some time.

I made good time early on, making quick efficient stops for some water, espresso’s and snacks here and there. The route followed farm tracks on top of levees which were straight forward enough, but a steady pollen filled headwind meant my sore throat and feeling of being run down was developed a bit. It was fairly monotonous, and being pan flat quite featureless apart from the occasional town along the way.

The day heated up considerably, and was glad to always be able to find a bar/gelateria open in most towns. There’s something remarkable about the restorative powers of espresso and ice cream, with maybe a coke and snickers bar to wash it all down with.

Shortly before Verona, late in the afternoon I came across a lovely cafe where I was hailed down by my first dot watcher. It’s always amazing to find people who will come out and wait for dots to come past, and was grateful for the coke and chat to distract me from the day. With the route past Verona likely to be fairly remote and with limited sleep and resupply options, I decided to stop there for the night, regroup and make an early push to finish the following day.

I bumped into another rider on the outskirts of town. We tried to chat but there were some language barriers so it was a brief discussion on the merits of my equipment choices and my desire for some bigger tyres. Today was great, but the route after Verona would be challenging to say the least.

I arrived in Verona in the early afternoon, and headed straight for my accommodation. I was keen to relax, eat, clean up and get a few supplies for the next day. With some expert local knowledge from a great friend back home, I found the perfect fast pizzeria and bought enough food for my lunch, dinner and breakfast.

I left early, but not as early as I would have liked. Getting up was a battle as the hay fever and feeling of being run down that I’d battled the day before had turned into a cold. A much sorer sore throat, runny nose and felt terrible. It was only 170 km to the finish, but wasn’t taking any chances considering how long Florence to Bologna had taken me.

The route stayed flat for a while, criss crossing various bike paths, vineyards, farms and long abandoned trails before gradually easing north up into the first of two big climbs. At one point it went past a battery chicken shed, right past the extractor fan. I’ve not experienced quite a stench before and was retching for about 20 minutes after.

The trails would criss cross various valleys, ridges and peaks before summiting. The route was tough, but I guess that was the point! “Nothing worth anything was ever easy”. These words from Mike Hall were echoing through my mind for much of this day. As were some of the curses I had for the race organiser, Giacomo!

I really struggled with the route a number of times. Appearing to follow a badger path  off the trail through the bushes, before realising the route GPX file was based on a ride and wasn’t the most accurate. A fair amount of guesswork was needed to find my way and the right trail.

The route was really challenging in every other aspect. Steep gradients up and down, through fields where the only path to follow was that of riders ahead, impossible to ride trails both up and down, trails that were effectively river beds littered with leaves, rocks, stones and loose gravel. Several times I thought ‘what the hell, SEND IT!’ and just let go of the brakes. How the bike survived much of this is a mystery, but it did.

I’d spent a long morning grinding out small distances and expending a lot of energy. After only having a small breakfast after sunrise, by lunchtime I was starving. I finally found a refuge on Maps.me when I got my next puncture. I could feel a slow puncture but wasn’t too far from the refuge so put my weight on the front wheel and pushed on. Just as I rolled off the gravel onto the tarmac I edged a stone and got a pinch flat. Dam it! My cold, tiredness and temperament was stretched but I fixed the flat and dived into the refuge for some cheese and salami rolls with numerous cokes. 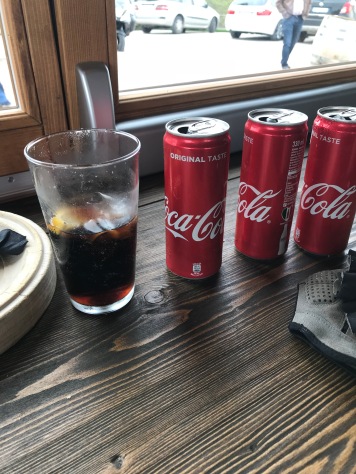 Some more trails through forests and the first signs of snow were a little worrying. When the trail cut through the top there was only one patch of snow still holding on from the winter. I had a go at pedaling through before being reminded who’s boss and had to jump off and push.

I was glad to have made it to the top and began descending down into the valley before the last climb up to Monte Baldo. I was doing the maths in my head on how long it would take me, and if I’d be able to get it done before dark. I’d learned not to use my normal maths for granted, but was fairly sure the rest of the route was sealed, but couldn’t be certain. 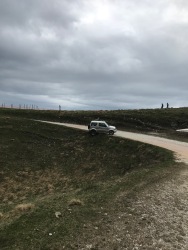 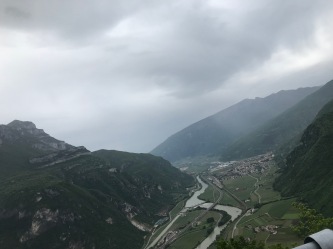 I was enjoying the descent down into the valley, a super steep but lovely road, when coming into a hairpin I realised my brakes had run out. I was slowing down, but wasn’t sure if I would be able to stop before hitting the barrier, but somehow managed to use what was left of the faded brakes. A quick change of front and back and down into the valley for some service station snacks and ice cream.

I probably spent too long procrastinating about doing the final 50 km push, and was feeling pretty crappy with the cold having taken hold. It was a really nice 20 km climb, not too steep, but challenging considering the distance and state I was in. I made it to the top just as the evening light was fading, and discovered exactly what the last 20 km or so will entail. It certainly was not a road. Goat track is probably the right term, and with a little rain that had been passing through was a little slippery, strewn with treacherous rocks and stones, with a nice steep drop off to one side. In the dark and wet it was not rideable. I pushed my bike along for the best part of 2 km, occasionally getting on and trying to ride before losing my bottle. It wasn’t safe to ride.

I finally made it to the descent side, but for the most part this wasn’t going to be easy. It had been drizzling even more and the path was strewn with rocks hidden by a layer of leaves. Slippery, treacherous and a mission to navigate in the dark. This 3 km took about an hour, then the road that it finally came onto was barely that. A trail with narrow concrete tracks and dirt ditch down the middle. The corners/hairpins were horrible – I can’t recall if they were cobbled or pits or rocks, but I certainly didn’t enjoy them. Thankfully the roads were drier down here, so it wasn’t too slippery.

Once out of the lanes and onto the last stretch of bike path the thunderstorm and heavy rain that had been threatening all evening struck. I layered up with my Attaquer race rain jacket – best piece of kit I own, and pushed onto the finish.

I was super happy to park up my bike outside the bike shop and shake the hand of Giacomo and a few other riders who’d finished ahead. With the rain, my cold had taken hold and I was something of a mess. The town was buzzing with the annual bike festival underway, but I was a bit too late for any food so after getting my finisher photo and sharing a few words with everyone at the finish, Giacomo sorted me out with some food from his hotel and a spare t-shirt as my drop bag was locked up in the bike shop.

Being my first multi day off road ride, and given I did it on a ‘road’ bike I felt that I had done quite well. It looks like I was a provisional 17th finisher based on the trackleaders site, finishing in just over 4 days and a couple hours. I plan to go back this year (2019), taking my previous experience and more importantly, an appropriate bike. My tyres, lack of clearance (had to write off the carbon forks from the wear) and collected mud, insufficient gears, narrow handlebars all contributed to making the race that little bit harder than it need have been. Having a cold and starting with a stomach bug were less than ideal, and all the worry about my gearing issues at the start put me out of any race contention early on. I’d no ideas about competing – I just wanted to enjoy it and finish. On reflection, I really did enjoy myself. Plus all the pizza, pasta and gelato I consumed along the way and in the few days I spent exploring Verona afterwards convinced me of how much fun I had! 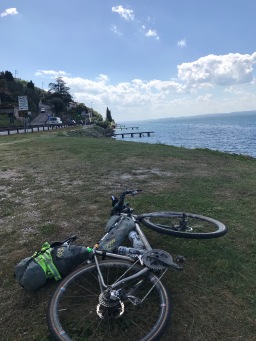