Start from the beginning here: TCR No 5 – The Start

Breakfast was inside the hotel restaurant from 8, so I set my alarm. I was up at 7 on my clock and breakfast was already being served. Stephane and I had two fairly amazing breakfast plates with cheese, eggs and some meat, bread, olives and maybe some fruit too. At this time I was a little confused as to why breakfast was so early, but didn’t ask too many questions… (it’ll take me to the finish to realise the time zone had changed +1 hour…).

The last couple of days had been tough, and looking back at the tracker both Stephane and I didn’t hurry to get going. It was gone 9am (actually 10am? not sure!) before I headed out just ahead of him.

I packed up and headed down the hill. I’d hoped for a bit more of a free wheel down, but there were a few false flats and reverses that slowed me down. Again, I’d set off without making sure I’d enough food and water, but managed to find a small cafe who were able to sort me out with some chocolate, coke and some water. As I headed further down the hill, there were more and more cars heading up to the mountain, or trying to park up by the lake. It was the weekend, and a holiday weekend in Romania, so it became crazy busy as I moved further down. 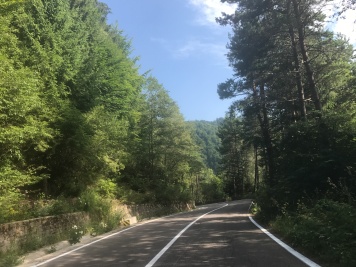 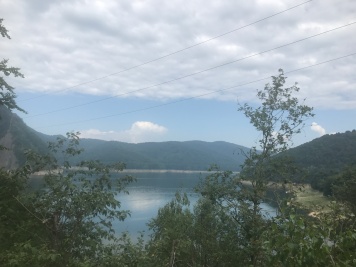 I was aiming for a bike shop in a town at the bottom of the hill to re-stock up on spare tubes. This was timely, as rolling into the entrance of one tunnel I dropped into a pothole of doom and caught a pinch flat. Nerves were starting again… I put in the patched tube, thankful it was early, temperatures were still cool and it held well. There were a number of bike shop options in Pitesti, but managed to find Velomax cycles just off my route who sorted me out with some suitable spare tubes. I bought 3 hoping I’d not need any.

It was getting warm now. 44 deg C. I found a service station with ice-cream and some more food and drink around the corner before heading on. The roads were pretty good. A nice change, but it was really hot. For about the next 4 hours I was stopping every hour or so, switching out water, eating ice cream, some food, and then going again. The wind wasn’t ideal and was a bit of a grind.

I’d been keeping an eye on the tracker, and Stephane had gone a slightly different route with rougher roads, but had made good time and got ahead of me. I could see #131 Robert was also ahead, and both seemed to be increasing the gap. I was trying to push on but the gap seemed to keep on growing. Early in the afternoon I resigned myself to getting a hotel for the night. Mainly down to the fact that I’d not had a shower since Bratislava and really craved some basic comfort.

I booked a room in Vidin, Bulgaria and made that my target for the night. After being delayed chatting at a service station after sunset, I made it across the border and to the hotel just after midnight (or so I thought.. I’d still not ‘clocked’ the time zone change). After a bit of time trying to sort out paying so I could check out at 5 am, I managed to have my long needed shower, washed out some salt from my bibs, and got my head down.

I overslept, and was up at 6am (actually 7…), and out the door in the pre-dawn light. It was quite cool, and looked like it’d rain, and it did for a bit, but only light drizzle. It was only a short 50km to Serbia, but if felt like really good progress.

I’d not had breakfast, so was happy to find a service station in Knjazevac where I had a good feast and stocked up my supplies so I had backup food. It was about 650km to go, and had one eye on riding through to the finish.

I spotted #23 Mathias Dalgas stopped in Nis, who turned out to be awaiting a wheel repair. I stopped in the town for a wonderful McDonalds, then pushed on towards the Macedonian border passing him and moving into 9th place. As I moved towards the border, I was closing in on Stephane in 8th. I bumped into him briefly before the border. #131 & 7th, Robert was not too far ahead, but my route turned off away from the motorway border crossing and up over a climb on a rural national park area into Macedonia. It was a really strange area, with the town just before the climb up to the border appeared to have hundreds of ‘missing person’ posters up everywhere. I was thinking of stopping, but thought better of it, swiftly navigating through the town and onto the climb.

Through the border, and onto the most horrific road surface in the world. It seems someone had dropped stones into some tarmac and didn’t bother with a roller to smooth it all out. It was an old tired road, and horrific to ride a bike on. The one memory and defining feature of Macedonia that I’ve got from two TCR’s is really really shit roads.

Thankfully, although it seemed to, it didn’t last forever. I came out of the descent into a small village getting ready for some sort of festival. Before long, I found my way onto a main road and into the edge of the town of Kumanovo. The road was busy, I was hungry and managed to get a little lost searching for a service station that served more than coke and water.

Bottles topped, I picked my way through some tiny back roads to get back onto my route and head south towards Veles. Finally, the roads were quieting with the late evening, and I was making some decent time. My goal was still to push through the night, but as is always the way with long days and riding at night, I was getting tired. I’m quite good at noticing when I need to stop and rest, but I also know that I normally don’t need to rest for long. A short 15-30 minute cat nap has the effect (for me) of shaking off the fatigue. Unless you’re aware of how your body responds, I wouldn’t recommend this – everyone is different.

I’d pulled over the side of the road just before Sveti Nikole and sat in the layby and closed my eyes for a short while. I nodded off and woke after maybe about 15 minutes, checking the tracker. It seems I’d passed both #12 & #131 about 5km back, and it appeared that both were stopped for the night. I was now in 7th place, and with it some new energy. I figured it was time to put some distance in. With 400 km to go, I started rolling down some quick roads and was really having fun.

I was now in 7th place, and with it some new energy. I figured it was time to put some distance in. With 400 km to go, I started rolling down some quick roads and was really having fun.

I made great time all the way down to Veles, and a little beyond, slowing only when the road started turning up on the way to Prilep. This was a 25 km climb at around 4%. It took me around two and a half hours, with two snooze stops totalling about an hour. It was a slow and tedious climb, and was something of a struggle with the fatigue. At one point I pulled out some jaffa cakes to help restore some energy only to discover, to my horror that they were cherry flavoured dark chocolate jaffa cakes. I was mortified. Not a huge fan of cherry or dark chocolate. I had a try and my fears were confirmed – disgusting. I packed them away and reverted to my old friends, 7 Days croissants.

It was nearly 5am when I made it to the top, and was followed by a terrific fast descent down to Prilep, where I found a bright, fully stocked service station. Coffee, a particularly dubious sandwich, crisps, ice cream, coke, water, and some more 7 Days for the pocket. The sun was coming up, and although it had chilled overnight I could feel the day was starting to warm already.

Looking on the tracker, I could see that #80 Nelson Trees and #187 Rory McCarron weren’t too far ahead, but moving. They were targets that I figured I could put a bit of pressure on by making a bit of ground up. I expected they’d both had some sleep and were fresher, but it was worth having a go. 260 km to Meteora. Things were going to be close.