I had a relatively good night sleep at the checkpoint in Honau at the foot of the Schloss Lichtenstein Castle, albeit only about 4 hours. There were a few comings and goings in the night, but I needed some sleep and was happy to wait until dawn to get moving. It was chilly when I woke up, but it was a really nice morning with the stream bubbling away next to the hotel garden where I’d bivvied up.

I ate what was left of the pizza and packed up my gear, being careful not to wake the fabulous volunteers snoozing in the gazebo. I was still half asleep, and my urge to get moving meant I’d forgotten to bother about getting water and breakfast in the Hotel. Quite a few riders had stopped in overnight and was also quite keen to get out ahead.

Within no time, I was on the CP1 parcours, a fairly short climb up to the castle. It was early and my legs had barely woken up, so was climbing nice and slowly. About a quarter the way up, James passed by dancing up like a mountain goat. I felt no urge to chase him down, wished him well on the ride and got on with my own thing. 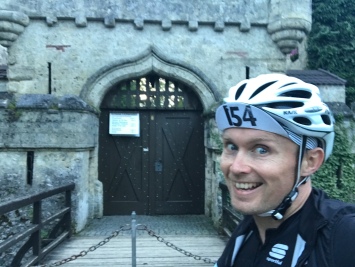 A quick selfie at the top, and I rolled down headed towards Austria and some of my favourite riding of this years TCR. The roads were perfect; empty rolling countryside, and it was building up to be a beautiful sunny day.

I remembered some great advice for finding water in rural France, so decided to see if it applied to Germany as well. After an hour or so of wondering if there were any villages in Germany, I stumbled across the perfect candidate. I’d found a church with a graveyard complete with the outside tap for watering flowers on the graves perfect to fill my bottles. Result.

The route wasn’t particularly flat, and had a number of fairly steep lanes to navigate, so it wasn’t the fastest way to Austria, but I thoroughly enjoyed it. It did mean that I was burning energy that I didn’t have, but eventually I managed to find a boulanger in a small town called Biberach, where I had a couple of sandwiches, water, coffee, coke and croissants. Basically filling up for the rest of the day.

After refueling, I packed the croissants into my back pocket and got my head down for the day. The sun came out, and made for a perfect days ride at first. By early afternoon the day was scorching with temperatures hitting the mid to late 30’s C. I was so happy to come across the most amazing spring in the town of Oy. A large obelisk of rock with water pouring out of the top. A quick wash with my head under the spring, and I was ready to push onto the border.

For the most part I had some more lovely empty roads to follow, but near the lovely town of ‘Wank’ I found myself back on a main trunk road and using the bike path along side it. I followed this path on and off all the way to the Austrian border, where I rolled over a bridge and it ended abruptly. The Austrians hadn’t managed to build their side!

Entering Austria was where the real climbing would start. I spent a long time riding towards a horizon that was slowly getting larger and larger, and looked quite spectacular. The first climb was the Fern pass. Bumper to bumper with cars. It was chaos. I followed the road passing most of the traffic until I found the cause of it all, some sort of festival. The traffic didn’t really relent so I headed off onto a bike path to get away from it all.

I followed this for some time, and while checking social media on this quiet empty road, I chanced to look up to spy a car that was flying towards me at speed. It didn’t slow down, but I managed to swerve off the side of the path to get out of the way. There were a few more to follow, all likely locals taking shortcuts around the bumper to bumper traffic on the Fernpass.

Thankfully, the car traffic led off into a road tunnel, and I followed the near empty road over the rest of the Fernpass to Nassereith. By now I was starving, originally planning to eat in the valley leading up to the Timmelsjoch pass, I found a McDonalds in Imst, after one of the most fun and fast descents in a while. Cars, motorbikes and motor homes all cheering me as they went pass. At least that’s what I think.

After an enormous feast, I pushed on towards the valley. I chanced to look over my shoulder to see the most threatening sky… The storm couldn’t have arrived at a worse time. The Timmelsjoch pass is up to 2,500 meters, and the road leading up from the valley to the summit is around 60km, plus a long descent to Merano meant it would be a 5 hour minimum. Not what you want to do as the sun is setting behind a ferocious thunder storm.

I’d literally turned onto the valley road when the rain started, so turned back a couple hundred meters to a petrol station for shelter. I knew right away, that was my days riding done. 250km was far below my intended target, but I figured I would make the most of an early finish and focus on an early start the next morning. I booked a room in a town up the valley and made my way up as the rain had started clearing. The hotel was perfect, with a Chinese all you can eat buffet restaurant across the road. Unfortunately, after washing my bibs and laying down for a moment on the bed I was lights out in an instant and failed to get any dinner!

My alarm work me just before 2am, and was kitted up and rolling by 2.10am. The Timmelsjoch is a really tough climb, and not one I would recommend to anyone, especially if they’ve not had any supper the night before, or any breakfast that morning. Not only is it a really long climb, in the dark it’s fairly uninteresting.. but the worst thing is the profile and gradient for the last 12-15km. It took me 55km and 4 hours to summit. Really slow. Really hard. The sun had come up, and it was small consolation that the views looking down to Italy were quite stunning. 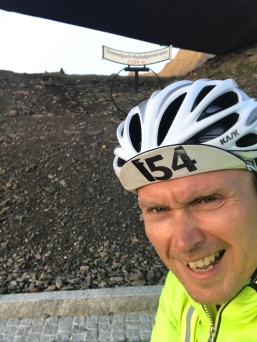 The descent down into Italy was great fun. The views were spectacular; endless switchbacks with about 18 tunnels. I had to stop half way down to change my brake pads that had worn out. Top tip – even if there’s some bite left, get fresh pads for the TCR!

I stopped at a grocery near Merano and finally had my breakfast at around 9 am. I was glad it had finally warmed up after a fairly chilly descent. I took my time to eat, drink and restock my food and water supplies before heading further down the valley. I’d lost a lot of ground overnight to other racers with the stop and taking on the Timmelsjoch while others were taking the easier, but busier Brenner pass to the east.

I found the roads down towards Trento a little tedious, but really scenic. A mix of quiet roads to Bolzano that I remembered from TCR No. 4, with long winding bike paths that would end suddenly next to a busy road. I found myself on the SS12 just before Lavis, and had to pull off the road as it felt really dangerous. I ended up rerouting up a windy twisty, and quite steep hill to get a village road to avoid it. It wound down into Lavis eventually, where I found a cafe for some ice cream, coke and a bit of shelter from the sun.

The only way to get past this town was to find a small town bridge a way of course, to ensure I avoided the SS12. It was a bit of a faff, but after the previous experience and as there was a portion of it that was banned, I felt it was a worthwhile detour.

Shortly after the stop I bumped into another cyclist on a really nice gravel tourer with just a handlebar bag. We chatted briefly at a set of lights before moving off… it hadn’t occurred to me that this was another TCR rider, he had next to no kit! At the next lights I noticed he had a Spot tracker on his handlebars. Turns out it was #131 Robert Carlier, a TCR veteran from 2015. It turned out his garmin had failed and was navigating on a mix of paper maps and a phone strapped to the handlebars. We both rode together for a bit on and off, both getting a little lost trying to find a route around the SS12 past Trento, then we came across possibly one of the most horrific little climbs, easily a steady 30%’er for a few hundred meters in the peak heat of the day. I managed to get up it without stopping, but nearly lost balance a number of times. Robert came unclipped at one point, but soon managed to get going again. We both agreed it was one of the worst climbs we’d ever done… That might change before the end of the day!

Shortly after we separated when Robert pulled over for some water. We would criss cross our tracks for the rest of the day.

I stopped at a cafe for some pizza, more ice cream and some coke as I was getting a bit wrecked. The route was all over the place, part meandering roads, part bike paths. At one point I came across a railway crossing that had just had fresh tarmac laid and was closed. I hid under a tree while the workmen who’d just finished removed the barriers. Hot day!

I drank a lot of water, stopping only when really necessary, and would regret not stopping for a proper feed before the end of the day.

My route went all the way down to Bassano del Grappa, before heading up to the checkpoint start location at the foot of the checkpoint 2 parcours, Monte Grappa. I was greeted by some very cheerful folks at the checkpoint, who were super happy and very welcoming. I managed a quick shower (using my base layer as a towel… not as bad as it sounded), before bumping into Stephane Ouija, #12. We had a quick catch up before I headed off to get some sugar drinks before tackling the climb. I scoffed some crisps to get some salts back in, topped up my bottles and was keen to push up the hill.

I nearly had to push the bike up a number of times. The early start, the Timmelsjoch, the hot day and short sharp climbs without a proper lunch meant I was running low. It was early evening, the light was fading, and I was really keen to complete the climb before the sun set. It’s a really tough climb, and does not relent. The guys from Pedal Ed were on hand, primarily to photo Stephane who is sponsored by Pedal Ed. They followed us both up the climb taking some fairly epic shots in the fading evening light. The finish of the parcours was at the Rifugio Bassano, a restaurant that was unfortunately now closed. The route went past the Sacario del Monte Grappa, a monument and tomb to 12,615 soldiers. It is a special and poignant place.