Politics and celebrity deaths aside, for me it’s been all about the Transcontinental Race. It is more than that though, to think of everything I’ve done to get me there and then beyond; its been incredible. Most of this I’ve blogged about in previous posts but it’s worth mentioning again the amount of fun I’ve had preparing for the TCR while riding with a great bunch of mates. If you want to see those TCR posts, start here

These guys have been with me all the way from winter rides in January through some crazy overnight rides and long mid summer rides. The knowledge and experience I’ve gained just through chatting to some friends and others I’ve met on or in the cafe after rides has also gone a long way to helping me prepare. I’m often terrible at taking on good advice, but with the sheer amount of it some actually stuck in the end.

What an amazing day to be riding a bicycle. #GIRO #Sundays #ridewithmates

The TCR itself went better than I could have possibly imagined. I originally had an optimistic plan of a 10 day finish but that went out the window as soon as I realised how poor and naive my route planning was and I hit the third set of mountains in France. Still finishing in 12 days, the main goal I had focused on, was achieved with a time of 11 days, 9 hours and 26 mins. 12th place was a huge surprise, but there were a number of strong riders that scratched ahead of me. Most importantly was how much fun I had doing it. The freedom you feel, coupled with all the sights, sounds and people you meet on the way has me hooked on this type of adventure. The bug has been caught, without a doubt. I’ve met some great people through the TCR, and I’m still meeting them. This is a big community, and I have been fortunate to meet some incredible people. You meet them on the road, at checkpoints, at the finish, at meetup rides and events. The common language and similar experiences, as well as the shared bug for it breaks down barriers.

I was absolutely blown away by a surprise party that the crew at G!RO threw for me when I came back from Turkey. Such a nice gesture, and is certainly a highlight of my year. Since that, it has been tough time post TCR. A little bit of the blues, low motivation, some injuries lingering on. As a result, not being able to ride was tough for a bit, but I did just enough to keep myself happy. I’m really quite lucky to have a good bunch of friends around me that will keep me motivated and join me in slightly crazy rides. One issue that I still have is that I have no control over my diet anymore. Possibly a hangover from the TCR, but maybe just who I am. January will need to see some significant weight loss and will power. Needless to say there’s a lot of stored energy to burn and a lot of ideas to use it up on.

A hero's return 🍺 | Straight off the plane, having just completed the @thetranscontinental Race – Nearly 4000km in 11 days across Europe | @b1rdmn you are a legend mate. Welcome back ✌️ | #ridewithmates #tcrno4

I took the opportunity to relax a bit and try to recover, but still managed to get in a few adventures with the G!RO crew in late August and September. Riding just for the sake or riding with your mates, with nothing to prove is why I do this. Highlights were a late summer cruise out to the Chiltern’s via Henley, and a ‘Castle Crusade’, in search of all the castles we could find between Portsmouth, Steyning and Esher.

In September I took part in the Revolve 24 team relay event at Brands Hatch. This is so much fun despite the tough endurance nature of it. This was the second year I’ve taken part in it with a team from G!RO Cycles, and is the best fun you can you can have on a bike with mates. So much fun! The first session on Track was a Le Mans style sprint across the track, jump on the bike and go for it!

Some serious competition this year as well. On the third lap, I gave way to let some others do the work and rolled onto the last wheel. The last wheels legs were ripped. This wheel turned out to be Jason Kenny’s. I narrowly beat Jason to 2nd in the fastest lap competition. Yes, that’s right, I’m faster than Jason Kenny!

We were doing quite well, but I think my tactics failed us towards the end. For much of the night we were holding 2nd, but gradually lost out to 3rd and finished 4th in the 4 team relay. It’s partly a luck game too – missing out on the mini peloton after a changeover meant working solo and sapping time. Still so much fun. Was a great chance to catch up with some fellow TCR No. 4 riders Paul Buckley and Stuart Bernie who were part of the team that pipped us to 3rd. Josh Ibbett was also there with the Bike Channel, and was great to see all the familiar faces.

We were racing with two 4 man teams from G!RO, and a lasting memory for me was finding a rider from the other team out the back of the track at 4am. What followed was a little over an hour of 2-up chaingang after we had managed to drop the hangers-on. Tired, cold, wet, with heavy legs smashing it round a very lumpy race track – couldn’t have been in a happier place!

Since September, things went quiet on the bike front for a bit. Sort of. I went to Las Vegas for my sister’s wedding and hired a bike. Naturally!

Biggest highlight of Vegas (after my sister’s wedding of course!) was a road trip out to the Grand Canyon North Rim, an incredible place!

I got out for one last big adventure at the end of November before the cold settled in. I rode the bike down to Newhaven on Friday night to catch the ferry to Dieppe. From there I rode down in the cold and dark night to Evreux, then up through Calvados towards Caen for a stop in a hotel before a ferry home the next day. I really enjoyed the lanes and countryside of Calvados, and must plan some more adventures like this. It was worth it just for the Boulangeries!

Boulangerie to the rescue! #hungry #veloenfrance

Christmas was once again a bit of a focus on the festive 500. I also had a target mileage for the year, so used both as some motivation to get some miles in over the Christmas period. I spent Christmas in Kington, right next to mid Wales, and used the opportunity to its fullest. On the way up from my mums in west Wales, I stopped off at Brecon and did a loop of the Black Mountain and reverse Devils Elbow. Stunning place.

Boxing day I headed over to the Elan Valley. Despite some navigational errors and some dead ends, I had one of my favourite days riding of the year. The Elan Valley is a special place, and I’m making some plans to go back there very soon!

I rounded it off with a trip down to Gospel Pass on the way back to the smoke. A really tough day, and a much steeper climb than I had given it credit for. Worth the effort by the time you get to the top – the views are incredible.

To round of my year on the bike we went for a social with the regular G!RO crew over to Windsor for some Iced buns, a perfect way to cap the year off. This ride brought my mileage for the year up to 13,000 miles, just shy of 21,000 kilometers. Happy with that!

This has been an incredible year, and have been really fortunate for the most part. Thanks to everyone that’s been a part of it! I can’t wait for all that 2017 will bring, with lots of challenges and adventures already planned and ready to go. Watch this space – I hope to keep it interesting! 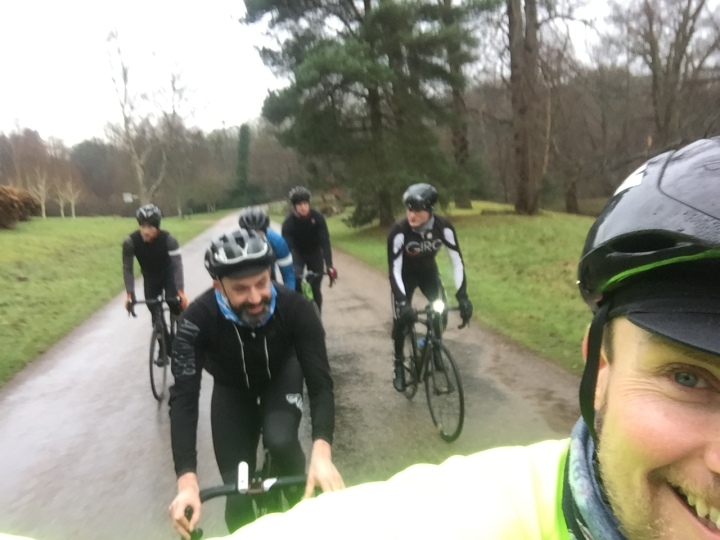