Wow. The start was pretty incredible. I had barely time to process it before I was trying to work out which way to go next.

A cobbled descent off the Muur, hang a right, spot Paul #67 and gave him a shout, then hang a left where almost everyone seems to be going straight. A pair went past shouting “another one for the cool route!”.

No sooner had they passed me and were pushing on they took another turn, then I was alone. It might have been 2o minutes, but that’s all it took. for the next hour or so at various junctions you would spot another rider, maybe the tail light of one down the road, or a dynamo light over the shoulder.

I don’t really remember how hard I was pushing, only that I was conscious that there were riders to chase after up the road and riders behind to push on from, while at the same time trying not to push too hard. When a rider passes, you sink a little and drift back. Then go again… always best to just stick to your own pace.

Before I’d realised it, the road signs were French and I was well on my way. I pushed on through the night until around 3 or 4am where I started slowing down and feeling really tired. My route was a little further west than most others by the look of the tracker, but I had made good progress. I could see that a large majority of riders were taking a flatter route to the east and seem to be moving faster. I don’t know though – your mind plays tricks on you.

I started looking for a bivvy spot. I had not planned to sleep at all the first day, but I was feeling so tired I felt that I had to. But then it happened. I looked over my shoulder and there was another rider behind me. That made my mind up – no stopping just yet!

I pushed on until about 7am, where I stopped on a bench overlooking the river. I was so tired, I decided I needed to take a power nap. It wasn’t the best sleep, but it allowed my head to shake off the sleepiness and fatigue that was slowing me down. With the day ahead, I actually felt fairly refreshed by the nap, as well as a few words of encouragement from some friends following my dot back home.

I’d done quite well with water and food through the night, only drinking about half my supplies of 1.5 litres. It was a relief to find a boulangerie at around 8am, to pick up some real food and stock up on water.

I remember looking at the trackleaders map at about 10am. I’d been riding for about 12 hours and had covered about 300km. I was quite pleased as it had been really quite lumpy with lots of rolling up’s and downs that slowed the pace somewhat. I wasn’t too bothered about where I was compared to everyone else, but it did help spur me on a little.

Any encouragement was helpful, as through the day the roads became somewhat monotonous and repetitive. Up, down, up, down, up etc. But at the end of the day, all I had to do was keep going! To break things up a bit I had a bit of banter going on with some friends on WhatsApp.

It got really hot as the day went on. The sun was really quite strong, and I remember the further south I went, the wind started getting stronger. It wasn’t bad enough to slow me to much, but it was a hot wind and made it tough to stay cool. A couple times I was going to stop to load on some sunscreen, but then I would see another rider behind and want to push on. I managed to get sunburn on the palms of my upturned hands holding the aero bars. A first for me. 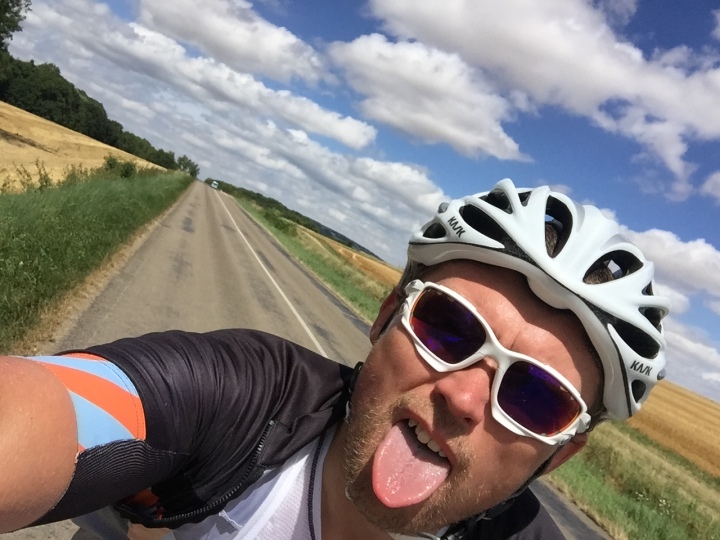 After about 400km, I got to the picturesque town of Toucy. It was really hot, and had achieved my base goal for the day. It was only 4pm though, and was a little unsure what to do. I even went to the local tourist office to see what hotels were available. Thankfully, all were closed or booked up for the national day which helped make my mind up.

I would keep going through the evening, bivvy, then push onto CP1 in the morning.

Shortly after Toucy, I found a nice quiet field where I could attend to a developing problem. Saddle sores. I was quite concerned that they had developed so early in the race, but was not surprised with the heat, sweat and inevitable salt build up. I cleaned up and applied some cream to help ease the pain, and pushed on.

My food through the day was all junk. Ice creams, crisps, chocolate, haribo. I’d eaten the boulangeries delights in the morning, keeping one veg pie back for the night as a backup, or bonus breakfast. I stopped quite a few times for water and coke, and was steadily eating through all my nuts and bars I’d started with.

With the heat and drying wind, I also noticed that I was starting to dehydrate so I doubled up my hydration tablet dose to try and keep salts in the body, without worrying too much about a water deficit. This had seemed to work in the past, and helps me keep my energy levels up without burning through all my water to quickly. 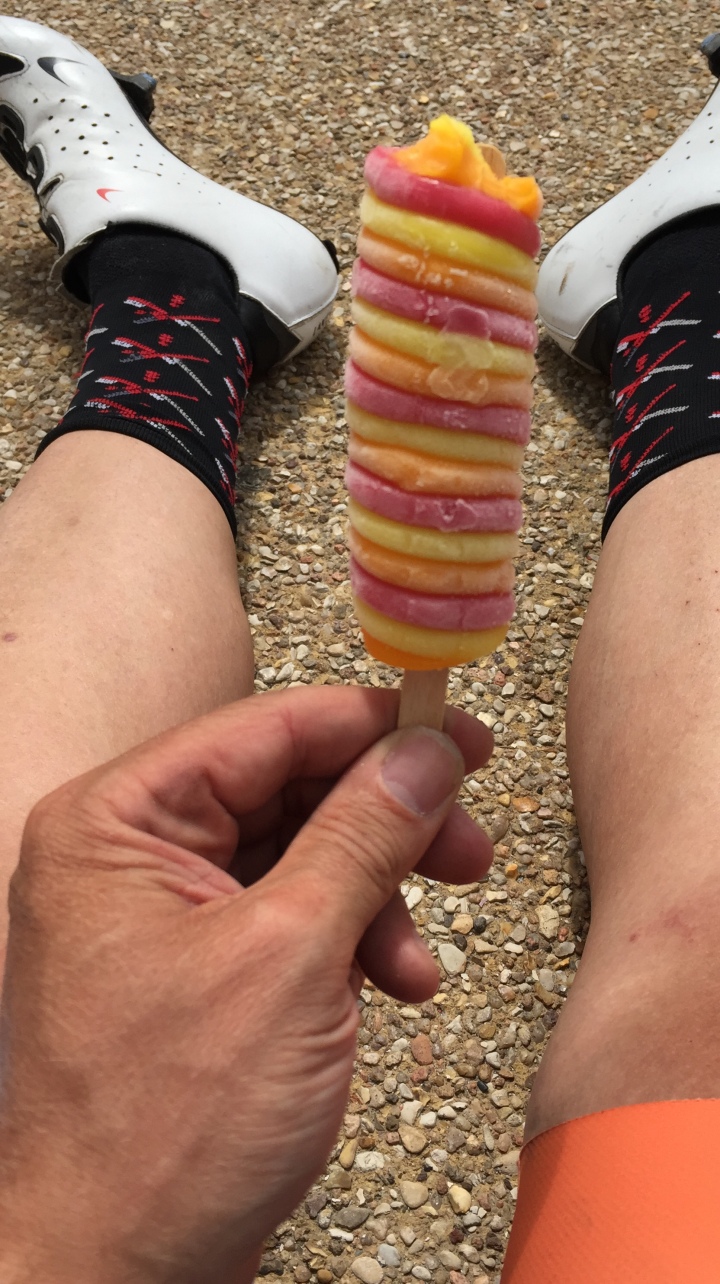 A great highlight for me was riding along the Loire in the evening sun. It was quite stunning in places and is definitely a place I will come back to. Probably via a flatter, less straight and nicer road though!

After the Loire sunset and a big dose of flies to top up on my protein, I was starting to get really tired. After Toucy, I’d planned to try and get another 160km in before midnight. 570 km in day one was in reach, but I fell just a little short at around 158 km.

The road was getting slow and lumpy, so I figured it would be best to get my head down and recover some energy for the next day. I found a field that was not too far from a farm house, and tried to keep quiet so as not to draw any attention. Just as a dog started barking I managed to smack my shin against a pedal which really smarted. I managed to stifle any yell of pain, and the knee swelled up instantly with a little bleeding. It was like this, but without any noise (One for the Family Guy fans).

Also, the field was one of freshly cut straw. Not the comfiest with crops of cut straw making it a bit like a bed of nails.

In anycase, I was tired and it was still fairly warm so I pulled my bivvy out and covered myself over on the ground and slowly drifted off under a starry night. Dreams mixed with my reality a bit here, and could have sworn I was chatting to people before I fell asleep. The joys of sleep deprivation!

I woke up about 2 hours later – maybe 2am, freezing cold and getting rained on with a bit of drizzle. Not happy. I’d had the foresight to cover myself in bug repellent, but they always find a spot, and had a nice juicy mozzy bite on the sunburn on the back of my neck. Great!

I pushed on, in a very tired state, but didn’t want to stop. So many hills. You go up one, down for a little bit, then up another. This seemed to be repeated all morning long. It was quite mentally draining, especially with the lack of sleep.

It turns out that resting on the aero bars at 4am is a really good way to start to drift towards sleep. It was the first time I noticed myself starting to fall asleep on the bike. Fortunately, it didn’t get too far this time, and once I’d noticed it I was able to keep ahead of it to prevent it from actually happening.

Prior to getting to Clermont Ferrand, I think I found the biggest hill in the area. Lots of switchbacks wound up the hill for an age. I had spotted this on the profile of the Wahoo earlier in the morning and was sort of dreading it the whole time. In the end it wasn’t so bad, just a bit slow and a little steep in places.

Coming down off the hill, daylight was breaking so I decided to switch to USB lights and start charging the battery on the Wahoo. It was all in all a good dry run for the many mountains to come – both from the climbing and descending perspective, as well as still having the thought power to sort out charging the devices.

On the way into Clermont Ferrand, I found a large Boulangerie. Here I stocked up on water and purchased an entire baguette pizza. A full size baguette, halved and loaded with cheese and ham. Washing that down with some coke, it was the first decent bit of food I’d had along with a couple of baked items the previous morning. It was heaven!

I decided to get my act together and push onto the checkpoint hotel. When I got into town, I suddenly realised I didn’t make a mental note of which hotel it was…! Fortunately, another rider arrived at the same time and I followed them to the hotel.

The CP1 was hosted by Lezyne who stamped my card and pointed me in the direction of the toilets to get cleaned up. I had a short conversation with Mike Hall, where I explained that I’d basically been hallucinating, and it was only day 2.

It’s also here where I learned that my open jersey along the Loire had meant a base layer full of flies. It took a little while to sort myself out, have a go at cleaning my bibs, lathering on some cream to ease the already sore nether regions.

I chose to push on and get on with the final part of the parcours as my route back came down through town again.

The road up to the Col  quite steep, and with the fresh dose of rain that had started made me somewhat concerned for the descent.

So, with CP1 done, I headed to a McDonalds just south of the airport to refuel, recharge and assess my position in the race. This was a major turning point for me, and one that I think helped me get through the rest.

I realised that I was going the wrong way. On the tracker all these dots were spinning off to the north east, while I was a lone dot heading due east for the mountains. In fact, there were three mountain ranges in my path.

It was here that I realised that my route was not ideal, and was not competitive. Riding through mountains is slow – it’s almost always faster to go around them.

But I like mountains! So that’s the way I was going, and that’s where it occurred to me – JUST ENJOY IT!